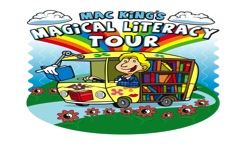 Las Vegas, Nev. – January 26, 2012 – Comedy-magician and Harrah’s, Las Vegas Headliner Mac King is preparing to embark on Mac King’s Magical Literacy Tour: Nevada Reading Week 2012, benefiting Clark County READS, the literacy initiative of The Public Education Foundation. The tour kicks-off with a book drive hosted by the Las Vegas Wranglers hockey team on Feb. 17 and 18. King will hand-deliver the books to five local elementary schools during Nevada Reading Week on Feb. 27 – Mar. 2.
Donations of three or more new or gently used elementary-school aged books can be made at the home games on Feb. 17 and 18 beginning at 7:05 p.m. at the Orleans Arena. Those who donate a minimum of three books will receive two free tickets to The Mac King Comedy Magic Show at Harrah’s Las Vegas and one ticket to a future Wranglers game on either Mar. 18, 20 or 27 (limit one per person).
Additionally, Mac King will be on-site to collect donations, meet and greet with fans and sign autographs during the game on Feb. 17.
Click to Tweet: http://clicktotweet.com/7aXcP Donate 3 new or gently used children's books at @WranglersLV games on 2/17 & 2/18 4 tix. 2 @mackingshow & @WranglersLV.

“I want to say thank you to the Las Vegas community and fans of The Las Vegas Wranglers who helped to make last year’s Nevada Reading Week tour a success. Because of your generosity we have been able to touch thousands of children’s lives, but there’s still more work to be done,” said King. “That’s why I’m calling upon my pals once again to continue to support literacy in Las Vegas. With your help, we can change the lives of even more children.”

Nevada Reading Week
During Nevada Reading Week, Feb. 27 – Mar. 2, Mac King’s Magical Literacy Tour will be making stops at five local elementary schools where King will personally deliver books collected from the book drive. During the tour’s scheduled stops King will also perform tricks from his show and read a few short stories.
In the past, King has visited local elementary schools to perform some of his magic tricks and to engage the students by reading a few short stories. At the end of each visit he donates an autographed copy of his book to the school library.

About Mac King’s Magical Literacy Tour:
Comedy-Magician Mac King has been a life-long advocate for childhood literacy and since settling down in Las Vegas, has made it his mission to promote literacy in Southern Nevada.
For years King has visited local elementary schools, spreading the importance of literacy to local students. In 2011 King decided to take his philanthropic efforts to the next level and launched Mac King’s Magical Literacy Tour, a citywide literacy initiative to foster the love of reading and rally community organizations to raise books for Las Vegas school children.
The tour kicked-off during Nevada Reading Week 2011 and since then has collected more than 5,000 books by partnering with several local organizations including: Las Vegas Wranglers, Springs Preserve, and Winder Farms.
About Mac King
Mac King has been recognized with numerous accolades including “Favorite Male Las Vegan,” and “Best Bargain Show” by the Las Vegas-Review Journal 2009 “Best of Las Vegas” readers’ poll, “Funniest Act in Magic Today” by Magic Magazine, Magician of the Year by The Magic Castle, and “Entertainer of the Year” by the Las Vegas Weekly “Readers Choice Awards.” King, one of today’s brightest and most talented magicians, takes the stage twice daily, Tuesday through Saturday, at Harrah’s Las Vegas at 1 and 3 p.m. in the Showroom Theatre. Tickets are $24.95 plus tax.
About ClarkCountyREADS
Clark County READS is the literacy initiative of The Public Education Foundation, in partnership with Clark County and the Clark County School District.  Clark County READS was launched in 2001 to improve student achievement by recruiting volunteer reading partners and providing books to schools and their students.  Clark County READS’ programs include Reading Is Fundamental, Reach Out and Read, Reading Partner Program, Library Enhancement, Book Re-Use and Reading Buddy Book Club. For more information about Clark County READS, call 799-KIDS (5437).
About The Public Education Foundation
The Public Education Foundation is a nonprofit organization dedicated to mobilizing community and global resources to meet the challenges of educating a growing and diverse Southern Nevada population. The Foundation’s programs and initiatives are designed to improve student performance and advance quality educational opportunities for all children. Since 1991, the Foundation has raised more than $75 million to improve teaching and learning in Southern Nevada’s public schools. For more information about the Foundation, go to www.thepef.org.
About The Las Vegas Wranglers
The Wranglers are currently playing their ninth season in Las Vegas. In addition to bringing exciting hockey action to the desert, the Wranglers work to support and enrich the local community through volunteer efforts, educational programs and supply drives for local non-profit organizations.  2011-12 season seat packages, starting at $30, are on sale now at (702) 471-PUCK. Individual tickets to Wranglers games are available by phone at (702) 284-7777, and can be purchased in person at all Coast Casino properties, Town Square shopping center or online at www.orleansarena.com. The Wranglers play all 36 regular season home games at the Orleans Arena, located next to the Orleans Hotel and Casino at 4500 W. Tropicana Ave.
###
For media inquiries, please contact:
Rachel Diehl
Preferred Public Relations
(702) 254-5704
Rachel@preferredpublicrelations.com
Back