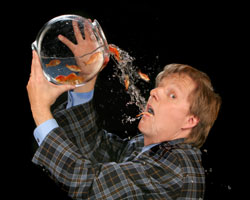 The event takes place on Friday, Jan. 27, 2012 at Rochester International Events Center. Doors open with social hours from 5 p.m. – 7 p.m. featuring live music from the JNH Band and a silent auction. Dinner will begin at 7 p.m. with performances by the night’s featured entertainers and a live auction. Tickets for the event are $100 and are available for purchase by calling (507) 254-8901. More information on the event is available at www.mendingmindsgala.org.

About Mac King
Now in his 12th year of headlining afternoons at Harrah’s Las Vegas, Mac King has been consistently lauded throughout his impressive run, including recently being named “Best Strip headliner” in the Las Vegas Weekly’s 2011 annual Vegas’ best awards. Las Vegas Review-Journal’s “Best of Las Vegas” readers’ poll named his show the “Best Bargain Show” for eight straight years (2003-2011) and deemed him “Favorite Male Las Vegan” in 2008. King has also been honored as Magic Magazine’s “Funniest Act in Magic,” the World Magic Awards’ “Best Comedy Magician” and the Magic Castle’s “Magician of the Year.”

Sought after worldwide, King has made television appearances on “The Late Show with David Letterman,” and all five of NBC’s “The World’s Greatest Magic” TV specials. King has also made several appearances at the “Just For Laughs” comedy festival in Montreal, and was a featured performer in the “Masters of Magic” series at the Luminato Festival in Toronto, Canada.

King, one of today’s brightest and most talented magicians, takes the stage twice daily, Tuesday through Saturday, at Harrah’s Las Vegas at 1 and 3 p.m. in the Showroom Theatre. Tickets are $29.95 plus tax.