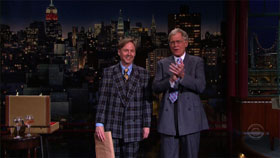 "One of the best shows in town..."
—The Dallas Morning News

"One day, someone is going to wise up and move him to the big time, and his ticket prices will move up, too. So catch him while he's still a bargain."
—New York Times

"That was too great man!"
—Muhammad Ali

"One of the best entertainment values in Vegas, this is an afternoon comedy-magic show -- and note the order of precedence in that introduction. King does magic, thankfully, emphasizing the only kind that's really mind-blowing these days -- those close-up tricks that defy your eyes and mind. But he surrounds his tricks with whimsy and wit, and sometimes gut-busting guffaws, which all serve to make you wonder how someone else can still perform stunts with a straight face. Check out how he takes a $100 bill and -- wait, we don't want to give it away, but suffice it to say it involves an old shoe, a Fig Newton, and several other unexpected..."
—Frommer's Travel Guide (click here to read the full Frommer's Mac King review)

"The best afternoon show in town. Frequently sells out, so purchase tickets in advance if possible."
—The Unofficial Guide to Las Vegas

"A true bargain on a Strip no longer known for them, King offers focused comedy-magic with a point of view"
—Fodor's Travel Guide

"This is a "must see" show for any trip to Vegas. "
—igoshows.com (click here to read the entire igoshows Mac King review)

"The best show deal in Vegas. Brilliant, and a must see."
—Frommer’s Las Vegas With Kids

"I'll start this one out short and sweet for those of you who don't like reading long reviews: Mac King's Comedy Magic show at Harrah's is one of the best shows in Las Vegas and without a doubt the best entertainment value in town. How's that for an opening? You'll note that the title puts the word Comedy before Magic and this is at once important and deceptive. It's important because King puts humor at the forefront, drawing his audiences in with a genial, good-natured comedic style that delivers out-loud laughs. It's deceptive because it can make you not notice how brilliant of an illusionist he is. Mac King eschews the grandiose smoke and mirrors type of magic that most of the acts in this town have beaten into a virtual parody of the genre. "
—vegas4visitors.com (click here to read the full Vegas4Visitors Mac King review)

"The reigning king of Las Vegas afternoons—10 years and counting at Harrah's Las Vegas—seems more like a Ragtime-era court jester with his plaid suit and folksy "Howdy!" King stands apart from the other magic shows on the Strip with a one-man hour of low-key, self-deprecating humor and the kind of close-up magic that's baffling, but doesn't take the focus away from the running banter. But watch out for that bear!"
—Fodor's Travel Guide (click here to read the entire Fodor's Mac King review)

"The show is screamingly funny and so wholesomely clean that when he does the slightest off-color move--like finding the "missing" card in the fly of his pants--it's all the more hysterical. He swallows earthworms, makes goldfish appear, works a Fig Newton into almost every routine, does a trick involving the burning of a hundred dollar bill that is so elaborate it resolves five or six times, and works with a newlywed couple--three-fourths of his act involves audience participation--while doing a trick with an old poncho he calls The Cloak of Invisibility. I can't even describe the Cloak of Invisibility. It's pure genius"
—Joe Bob Briggs

"Mac King is a great comedian. Which means he's not only funny; he also makes it look easy. That, in turn, invites the public to warm to him immediately; very few entertainers are able to attain such a quick rapport."
—MAGIC Magazine

"Mac King has a dual personality. On one hand, he has the wit of a stand-up comic. On the other, he has the skills of a superior, sleight-of-hand magician. King has a charm that appeals to his fans, and a sense of humor that may make you forget how talented a magician he truly is. "
—LasVegas.com (click here to read the entire LasVegas.com review)

"Saw this show for the first time many years ago because it was a comp from Harrah's. Have been back 3 times since on our own dime."
—about.com

"Take this opportunity to see Mac King live at Harrah's Hotel and you'll be glad that you did!"
—All Vegas Guide (click here to read the entire Mac King review)

"Mac King’s act is one of Vegas’ treasures.The crowd is on the edge of their seats the entire show."
—AccessVegas.com (click here to read the entire AccessVegas Mac King review)

"Best Deal on The Strip...Looking like a dressed-up hayseed, but displaying an impish wit that belies his look. A 'Best Bet' for the weekend."
—L.A. Times

"Perhaps for the money the very best entertainment on the strip. Mac King is funny, with a sense of humor that is both corny and cutting edge. He is also a very talented sleight of hand magician that performs magic with little or not props or gadgets. This afternoon show is appropriate for all audiences and no goldfish were harmed in the production."
—About.com (click here to read all about.com Mac King reviews)

"The "king" of afternoon Comedy and Magic"
—VegasOnDemand.com