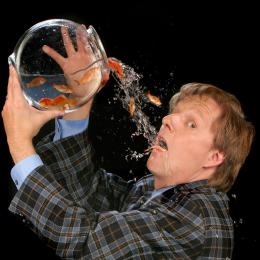 Acclaimed by MAGIC Magazine as the premiere comedy magician in the world today, Mac was just named “Magician of the Year” by the Magic Castle in Hollywood, just appeared on his seventh TV special for NBC-TV, just got voted the 6th best show in all of Las Vegas, and just rocked the audience on The Late Show with David Letterman. He is currently starring in the long running The Mac King Comedy Magic Show at Harrah’s Casino and Hotel in Las Vegas where, over the last 11 years, he has performed an incredible 5720 shows to nearly one and half million fans.

Before moving to Las Vegas, Mac spent 200 days a year on the road as an after dinner corporate entertainer, wowing companies around the world (Microsoft, Nationwide Insurance, Nissan, AT&T, and hundreds more) with his astounding sleight of hand and irresistible humor. He still does a select few of those shows.

According to his wife and daughter, Mac is a fine husband, a great dad, and all around swell fellow.